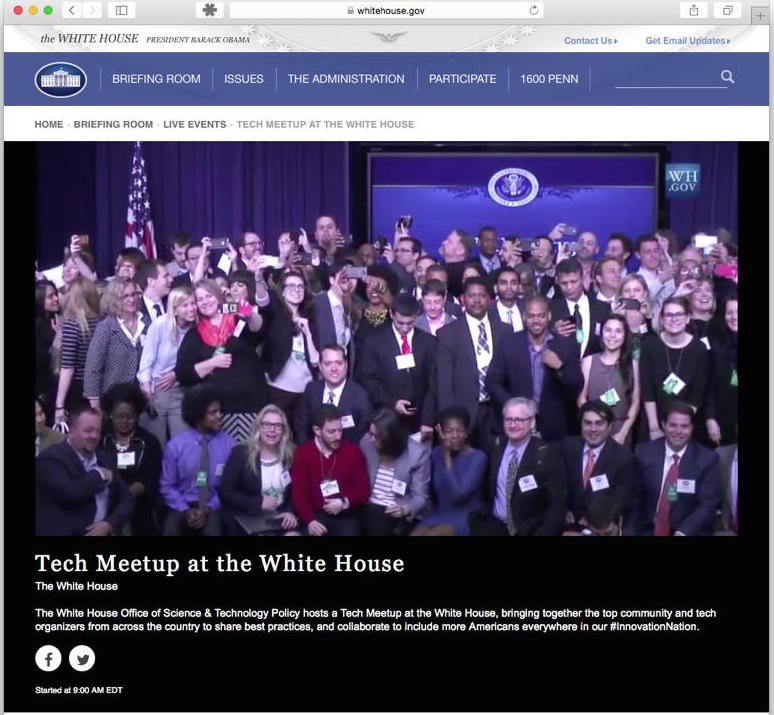 "Home is where your startup is." - @NJTech. Great reminder on the power of community building. #WHMeetup

The morning began with comments from Heiferman, Smith and the Director of the National Economic Council Jeffrey Zients, talking mainly about the important role that tech-sector growth has in building the national economy, discussing the White House’s “TechHire” initiative, among others. All emphasized the power that those in the room yield to make a difference, as Heiferman often came back to the point, “You are creating opportunity.”

Tech Meetups and the Organizers behind them change lives every day. Check out their powerful stories: https://t.co/Z95o8qzVkV #WHMeetup

The conference moved into a more lighting-round of presentations, with local meetup directors, technology evangelists and others from around the country sharing how they’ve bolstered their local economies with tech, even in often thought to be disconnected rural areas, where there are small pockets of booming technology innovation. This included presentations from groups like CodeCrew in NY, the NJ Techmeetup, NebraskaJS and Build With, Not For. Incredible links were found among conference attendees who were able to find ways to connect people there to resources needed, and a major focus was not just on the power of tech-driven economic growth, but the need for this industry to do a better job diversifying it’s ranks from every perspective.

The afternoon session moved to an “unconference” setup, where conference attendees designed the program for the rest of the afternoon, largely based on broader topic-drivers like “What can I give?” “What do we need” and more, and broke into smaller groups to discuss the topics that they were suggesting.

Personally, I got the chance to meet other elected officials city officials and help connect some people there with resources they need, for example people who teach coding to underemployed to a great civic/technology coworking space.

The idea that technology-related growth can drive economic development is not only interesting economic policy and one we’ve talked about doing in South Orange, but it’s something that I live every day through the growth of my own startup digital company, Veracity Media.

There’s a ton of young people out there who inherently understand technology and the role it can play in not just making organizations work better and more efficiently, but also in helping leverage human, intellectual and financial capital towards larger goals of social progress.

On Friday, there were a lot people in the room, from different demographic and age backgrounds and parts of the country who all see the potential power there. And one of the greatest parts about it, is that they see the progress not coming “outside" of the government, and not just “inside” the government, but in this cross-sector blurring, a topic that we talk about in my government/technology class I teach with Matt Hale at Seton Hall. The idea of who exactly delivers a service to someone depends on whatever the most efficient and accountable framework is at any given point in time, rather in rigid or inflexible processes that aren’t able to accommodate a changing marketplace or economic dynamic. It’s a flexibility that isn’t baked into the institutions of government, but it’s necessary if we’re take the government we have and help turn it into something more innovative, democratic and accountable - something that better represents the priorities of the people that it’s here to serve.

These conferences and meetings are always fantastic opportunities to learn about what other people are doing, but it’s still such a brief snapshot into their lives, knowing that every day, they’re living the concepts that are being discussed actually making an impact. It’s hopeful to see government in the United States at the highest level engage with these entrepreneurs and help find more ways to support them in the work that they’re doing to support their communities, and ultimately their local and regional economies.

You can read the full coverage from the White House and CNN.

Watch part of the program below: