I've said many times that Open Government isn't just a talking point, and in South Orange, we always did our best to live it every day. As an elected official, I always tried my own personal best to serve openly and transparently, and encourage others to do the same. But being an "OpenGov" proponent at the municipal level isn't just about what we can here and now, but it's about imagining what government could be, and advocating for innovative changes at the state and national levels that will help make truly participatory and inclusive government a reality for everyone, as well as telling our stories (success or failures) to help others do the same.

Before I go on any further, it is important to note that South Orange has, for a long-time, been an advocate of utilizing our website and online platforms for getting information out, and this has only grown recently. These things cannot be accomplished without a team, and in South Orange, we are fortunate to have professional staff that are incredibly forward thinking about how we use technology to improve government services. None of these things are possible without them. Here are some of the concepts that are important to us as we continue to improve our transparency. 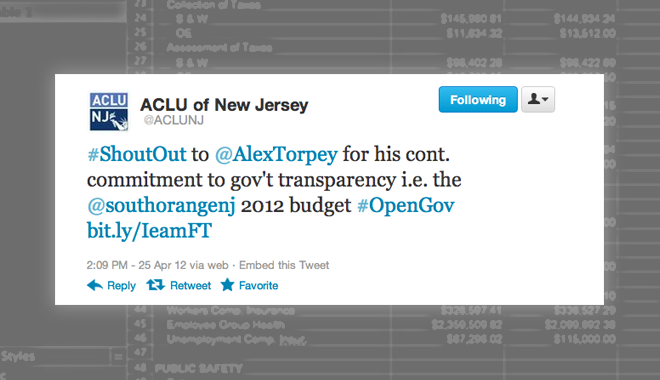 Open Budgets. South Orange has a track record of putting budget information online and presenting clear information about budgets during the meetings. In 2012, we took it a step further, by placing our actual $32 million municipal budget online in a Microsoft Excel spreadsheet. This allows anyone to download the budget, play with the numbers, see what changes have what effect, as well as help put our information out in there in a standardized format that can be used by third party application developers or services. Read about our open budget on our website and in the local media. You can also download the 2012 South Orange municipal budget. In 2013, we released the budget, back to 2008, in an interactive online tool, bringing groundbreaking transparency to municipal finances, and setting an example for local governments across New Jersey.

Detailed Issue Explanations. When village-wide reassessments took place in 2012 and many residents found themselves wanting more information about how the budget worked, how much of the increase came from the Village versus the reassessment and more, we didn't shy away from explaining the details, but rather placed a very detailed explanation and discussion of these issues on our website and in local media. The same for road paving, budgets and other areas - I found that providing community members with (sometimes very) lengthy explanations, basically giving them the same information we had access to, when possible, helped them understand how (overly) complex the processes were, and also to help ensure that people knew how seriously we took performing processes by objective and standardized methods, whenever possible - one of the best ways to reduce the possibility of bias or corruption is by creating a plan and making sure it's not just followed, by available for any stakeholder to see (if not participate in).

Board of Trustees Meeting Restructuring. Realizing that there isn't adequate time for community members to present their comments in the Board meetings, in 2012 I added a second public comment period to every single Board meeting. One comment period before the Board takes any action, and one after, allowing members of the public to comment during both periods. South Orange has a long history of placing agendas (and other public documents) online, and these new comment periods help allow citizens to give greater feedback on those items, both before and after the governing body takes action, instead of just one or the other, or forcing a community member to wait hours til the end of a meeting to be able to comment. Additionally, by instituting a rotating-voting system, where each vote begins with the next governing body member, rather than always beginning with the first person, we have eliminated the arbitrary benefit of having a name late in the alphabet and the downside of the reverse for people with last names that are at the beginning. This innovative practice is a best practice for any governing body which utilizes multi-member sequential voting.

Procedural Organization. For example, by requiring that all agenda submissions for considering at a public meeting be submitted through an online form, instead of just by open-ended email without context, budget information or backup materials, more information is able to be gathered, tracked and logged. Agenda submissions (By Board members as well as department heads) require estimated budget impact, narrative, scheduled meeting priority, history of committee review, for example. More information is able to be presented to the governing body and the public before the meeting. 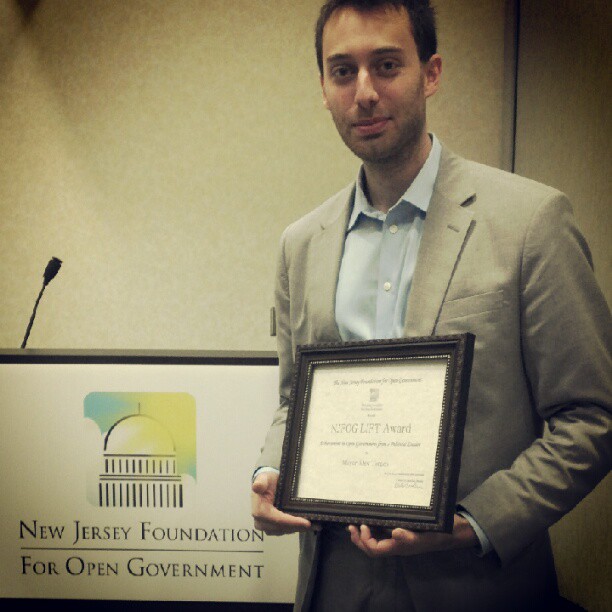 Accessibility. Being an accessible elected official is important. And although many community members find it easier to stop into one of our local businesses or Starbucks when I'm working down there (in my "mobile office"), I also instituted weekly office hours in Village Hall, inviting the public to come speak their mind and meet with me every week. Additionally, being available on Facebook and Twitter are great benefits to being able to keep a pulse on what's happening, share important (and sometimes emergent) information and connect with people who live in town. During our most major storms, I made myself available on every possible platform, including giving my cell phone publicly to allow direction communication with residents who were in the dark with lack of information from organizations like PSE&G.

Digital Village. As of October of 2012, the Village is currently at the beginning of the stage of a multi-pronged approach to getting our government even more online than it already is. Currently, we have a wealth of public documents, such as agendas, minutes, resolutions, ordinances, permits, forms, applications and much more online. Now we want to make that information easier to find, but totally redesigning the website from ground on, taking care to use cloud based tools to help us manage our information. Next, we will examine new and more redundant emergency notification systems that will allow emergency management personnel to send village-wide notices from a smartphone or tablet - ensuring that we can always get information out quickly. And next, we will institute a 311 system for taking complaints, service requests and other permitting/application processes right on the website. This allows our employees a more efficient workflow, while also allowing for email notices to residents when permits are completed and easy access to reporting issues from public works problems to new ideas for the downtown.

Citizen Involvement. South Orange has a number of active advisory committees that help advise and assist the Board of Trustees and Village government in its work, such as the Transportation Advisory Committee, Citizens Public Safety Committee and Citizens Budget Advisory Committee, to name a few. Also in fall of 2012, the Village re-established the Public Information & Marketing Committee, which has the goal to assist the Village in communications, marketing and finding more ways to engage its citizens. Citizens are involved in development, and are seen as key stakeholders, to help drive community-integrated development practices, and they participate, to a very significant degree in a number of these areas because a) the local government provided the smaller group, more discussion oriented place for them to do so, but also because they know that their comments were taken seriously and really does impact what the government does.

Storytelling and "thought leadership." Especially in modern America, when so many citizens have so little trust and faith in government, it's more important than ever to ensure that we in government talk about what we're doing, so that others can learn from our successes, and our mistakes. Towards this end, in addition to our work in South Orange which included explaining issues in a more detailed fashion, meeting with community groups on specific issues, proactively and upon their request, going into our public schools to talk to children about civics and government, interfacing with other governments in other areas, and my outside work with Veracity Media, Rethink Leadership and others, I started co-teaching with Dr. Matt Hale in Seton Hall University's Master of Public Administration program, to help provide a space for our future government leaders to engage with cutting-edge governance theories and to learn how to be more critical, ethical and effective, in the way that they work in government. Read more here.

Some of the ways that we have made South Orange more transparent and technology friendly:

Check back often, this page is continually updated!

Get Involved in Open Government:

Learn more - Get in touch

2013 State Of The Village Address

2012 State Of The Village Address