Some change is coming to South Orange and I wanted to make sure you knew about a couple big things next week:

As you may have heard, Monday night I will be presiding over my last Board of Trustees meeting as Village President in South Orange. Over 100 meetings later (with a 100% attendance record at our twice-monthly Monday night meetings - my teachers at CHS would be proud!) I will bang the gavel in South Orange for the last time on Monday.

The meeting agenda is short, and we’ll have a brief ceremony and some brief speechifying, of course, before retiring to Above Restaurant and Bar to toast to this incredible community we live in and to all of those who have made it that way. We’ve made so much progress, and none of it would be possible without so many people, and so many of you. (If you want a recap of where we’ve come in the last few years, check out the 2015 State Of The Village.)

The Board meeting begins at 8pm, and there will an opportunity for comments as well, or just hang out with us before we adjourn and move to Above around 9-9:30pm.

But more importantly than just celebrating the last four years - we need to think about the next four, and beyond.

We need you to make sure the progress we’ve made in South Orange in the last four years - and especially the last two - continues. And to do that, I’m asking you to join me in voting on Tuesday, May 12 for Line B - Sheena Collum for Village President, and Mark Rosner, Howard Levison and Deborah Davis Ford for the Board of Trustees.

Sheena has been a tremendous asset to South Orange throughout her years, first as a student at Seton Hall, as a volunteer in town, and especially in the last two years as trustee, and chair of our public safety committee. She’s helped usher in much-needed upgrades, new tools and programs for our police and public safety departments, and invested considerable time in supporting our business community, especially the newly renamed Seton Village (Irvington Ave corridor), and been one of the most vocal advocates for smarter growth in downtown in South Orange (It helps to be a planner by profession).

You can read more about her accomplishments, platform and endorsements from other community leaders at southorange2015.com or by clicking on the photo below, my attempt to transport South Orange 2015 lawn signs on my motorcycle today - my official endorsement photo. 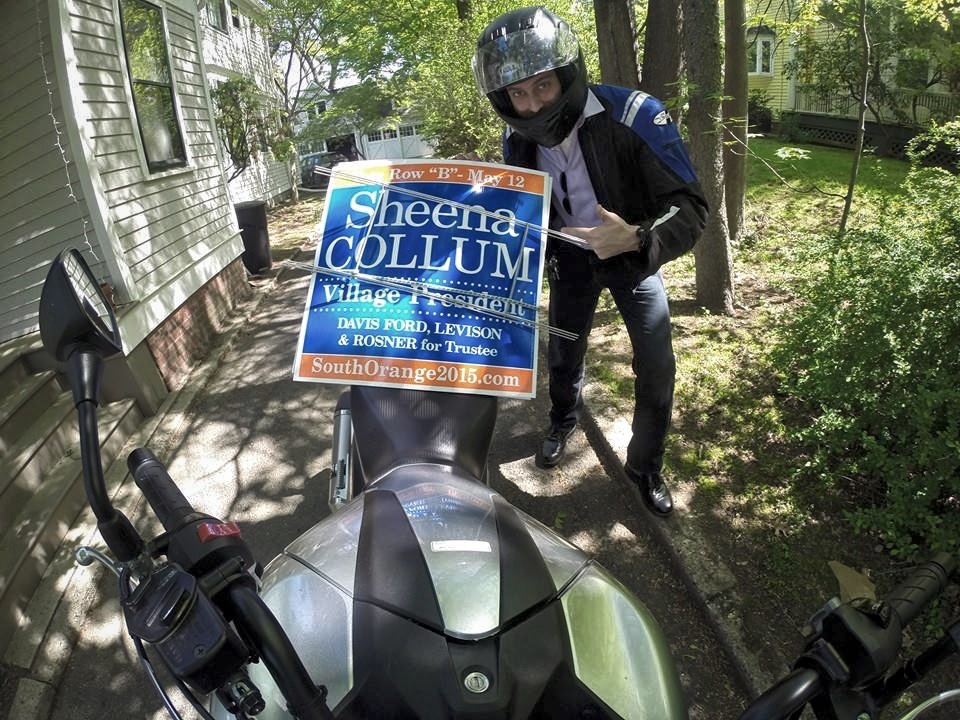 Without a doubt, Sheena is the best person to build upon the progress we have made and continue to control costs, bring more investment into the downtown, continue to reduce crime, build community-police relations and generally be an advocate and a leader for our community. She’s passionate, driven, incredibly knowledgable and one of the hardest working people to ever sit in one of those seats.

I strongly urge you to join me in going out to vote for her and the rest of the Line B team on Tuesday, May 12th. 2015 will mark another historic election, bringing a woman to the Office of Village President for the first time in South Orange’s history, and I can’t think of someone better for it than Sheena Collum.

In the coming weeks I look forward to updating you with a brief recap of all the progress we have made, as well as some of my own personal next steps. But for now, I am simply looking forward to a great last Board of Trustees meeting on Monday and an even greater Election Day for South Orange on Tuesday, May 12th.

Hope to see you next week!

P.S. you can find local media coverage of the election and candidates through the Village Green, TAP and the News Record.