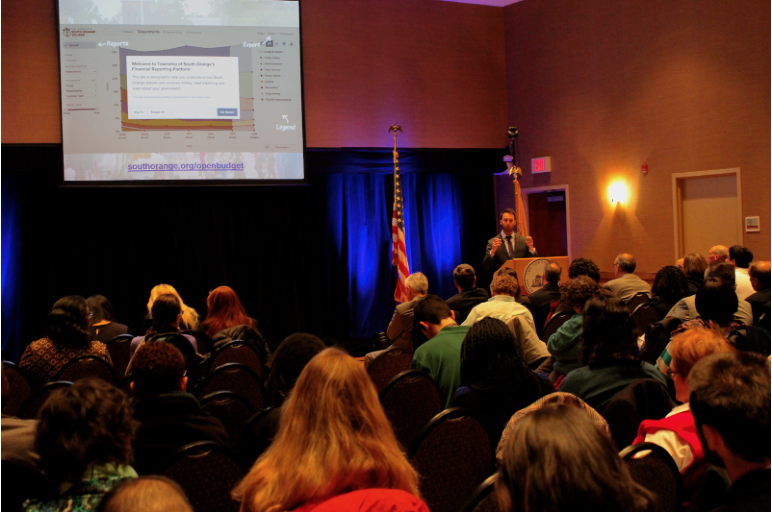 2015 State Of The Village recap, video, transcript, and more

Village President Torpey: The State of the Village is strong because the community is strong.

With over 100 village officials and community leaders in attendance, Village President Torpey delivered his 2015 State Of The Village address Monday evening. Recounting accomplishments of the past year, he lauded what he considered the “truly remarkable” success of the current governing body and community members for rising above divisiveness that in the past had stood in the way of progress, creating a real collaborative political and civic environment that exists in very few places and has helped drive so much of the Village’s success that was discussed throughout the evening.

Before beginning, Torpey noted the difference between talking about the “village,” which he called the institution of the government, versus the “Village,” representing the larger concepts, culture and community around government, making sure the “State of the Village” wasn’t just a recount of the performance of the institution of the Village government, but rather a holistic discussion and evaluation of the entire environment in which new ideas get discussed and codified into laws in South Orange.

Torpey led with the importance of transparency in government, and discussed not just steps the Village has taken - most notably with its budget and in Board meetings - to become more accessible and transparent, but talked about an ordinance to be introduced shortly that will codify all of the collective best practices to set the expectations - and requirements - for all those that will come in the future, and touched on the importance of ensuring that transparency is embedded in the institution itself, not just as a value of any particular elected official, which he claimed is too often the case in government.

Noting that 2015 will be the fifth municipal budget in a row with a tax increase the lowest since the 1990s. Torpey commended the staff for doing more with less, the importance of bringing in new ratables to help further control taxes and generating revenue through shared services, such as providing Maplewood’s IT services. In the last four years, Village President Torpey presented that between completed, underway and anticipated redevelopment projects - leaving out several that almost double this number that are still too early to technically count - the downtown has seen $164 million of private investment, plus millions more in new businesses and renovations that have occurred in that time frame.

Village President Torpey emphasized not just the value in creating new homes for people to move to South Orange, additional public parking and benefit to the business community, but  the tax and economic value of redevelopment. Talking specifically about the 3rd and Valley project he said, “You can think of it this way: if we had to raise that same $570,000 in new taxes instead of from new revenue, the average assessed homeowner would pay an additional $116.89 per year. And again, this is just one project, in one year, that can have that level of impact on your taxes.”

In addition, although Village President Torpey noted much of the success across a wide range of departments, from steadily decreasing crime rates and more community policing programs, increased revenue through the building department, success of the Village’s 311 application, record attendance at events in and around the downtown and much more, he took significant time out to talk about the larger community’s role in these successes and importance of the goal-based culture that defines South Orange’s civic space in 2015.

Starting by thanking “every single trustee who was introduced earlier, who is working hard at making a difference, not just making a point,” Village President Torpey discussed the collaborative fashion in which the current elected leaders engage with each other and with the larger community. This in turn has lead to a more open and productive environment for people to get involved, with the Village seeing record-breaking levels of participation from community members on working groups that are solving real problems, such as aiding in support for the senior community, identifying community policing issues and ideas, recruiting more businesses to the downtown, redevelopment and revitalization along Irvington Avenue and improved relations between the community at Seton Hall University.

Village President Torpey noted that it isn’t easy to create a collaborative and respectful working environment in government, but gave credit to the governing body, to department heads and staff, and most notably, community members, who volunteer their time to help use the institution of government, not as a tool for division, but rather a tool for progress towards the shared goals of a better future for South Orange.

Torpey concluded by pointing out that there is no lack of extremely daunting challenges in the world, that aren’t worth talking about just because “of the impact they have on us, but because of the impact we need to have on them.” He pointed out that the world needs to hear about stories like the real community collaboration and leadership happening in South Orange, which can serve as  an example elsewhere. He called on community members to not hold success stories close, but rather to “shout it from rooftoops” to help “shine light on examples of good Government when you have it, in an effort to help others find a way to do the same.”

He continued: “We have shown that when you have the right input - a community and governing body committed to progress, you get the right output - a government that performs exceptionally well.”

“The Village President has continued the tradition he started a few years ago in formally and publicly informing the community on the State of the Village, going well beyond the mere “in writing” mandate of the Charter” said Village Administrator Barry Lewis, who continued  “Alex effectively described the intangible qualities and extraordinary level of citizen involvement that define South Orange and make it the special community it is, while connecting those qualities and that involvement to the tangible successes of the South Orange government”

Village President Torpey ended with not just a call to action but also a reflection on the vital role all community members play in the process: “So yes, I stand here confidently tonight to tell you the state of the village is strong - both the small v village and the big V Villlage. And I am not only happy to report that to you tonight, I am proud, and honored and humbled to have the opportunity to participate in this epic story with all of you - not just for what we’re doing here in town, but for the example we are, and must set, for the rest of the state and the rest of the country at a time when they need leaders like us.”